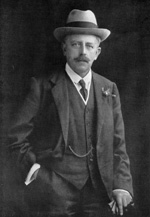 William Rees Jeffreys Hon.MTPI.,C.I.Mech.E  was described by Lloyd George in 1937 as ‘The greatest authority on roads in the United Kingdom and one of the greatest in the whole world’. He led the campaign to seal the nation’s roads so improving travel for road users and reducing roadside nuisance. He was a major force in developing the national road classification system. He was also a keen cyclist, a proponent of safe road design, and concerned with promoting the idea of roads as an amenity opening up access to the countryside for recreation and the appreciation of beauty, as well as providing connections between villages, towns and cities.

Rees Jeffreys occupied many influential positions in promoting the interests of road users including Secretary of the Road Board, Secretary to the RAC, Chairman of the Roads Improvement Association and Honorary Treasurer of the Institute of Automobile Engineers. His book, The King’s Highway, published in 1949 by Batchworth Press is of particular interest.

Rees Jeffreys established the Road Fund that lives on in his name in 1950. Following his death in 1954 his estate funded the endowment which has for over 60 years offered financial support toward education, research and physical projects that would carry on his work.

Click here to see the original Trust Deed and here for Annual reports and accounts.